I was looking for a bare-bones wordpress theme on which to build a custom site. The “Bones” theme from http://themble.com/bones/ looked great(probably because of the skelton pirate) and it was built using the SASS(syntactically awesome stylesheet) preprocessor. I’ve been meaning to sit down and learn SASS for a while, so I said to myself, “this is a good opportunity to get an introduction.”

Most evangelists of the preprocessor say that it’s easy to start using, that you can start writing without replacing your entire stylesheet. Here’s what the guys at themble say “Sass comes baked into Bones. You’ll be off and running in no time. Never worked with Sass? Don’t stress, it’s not as hard as you think.”

The first thing I wanted to do was place a background color in the header. Pretty simple, so I thought. Instead, I opened the scss folder and found ~25 style sheets and something called the config.rb. My text editor, Sublime-Text doesn’t have SASS context coloration like it does for other programming languages. So every page was just solid white on black.After digging through I found where the header was called and where the colors were defined. I tried to change the color values, no effect, I tried to change the color variables, still no effect. 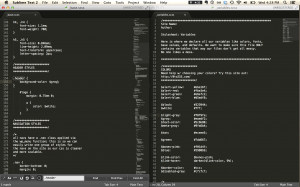 The caveat is that I’m used to charging in “commando style” and making changes on the fly. Obviously (only after messing with this for an hour), SASS requires a preprocessing engine to actually make the files into a stylesheet, something that’s not included on my server.

Lesson learned. When I actually start using SASS I will post thoughts about it.